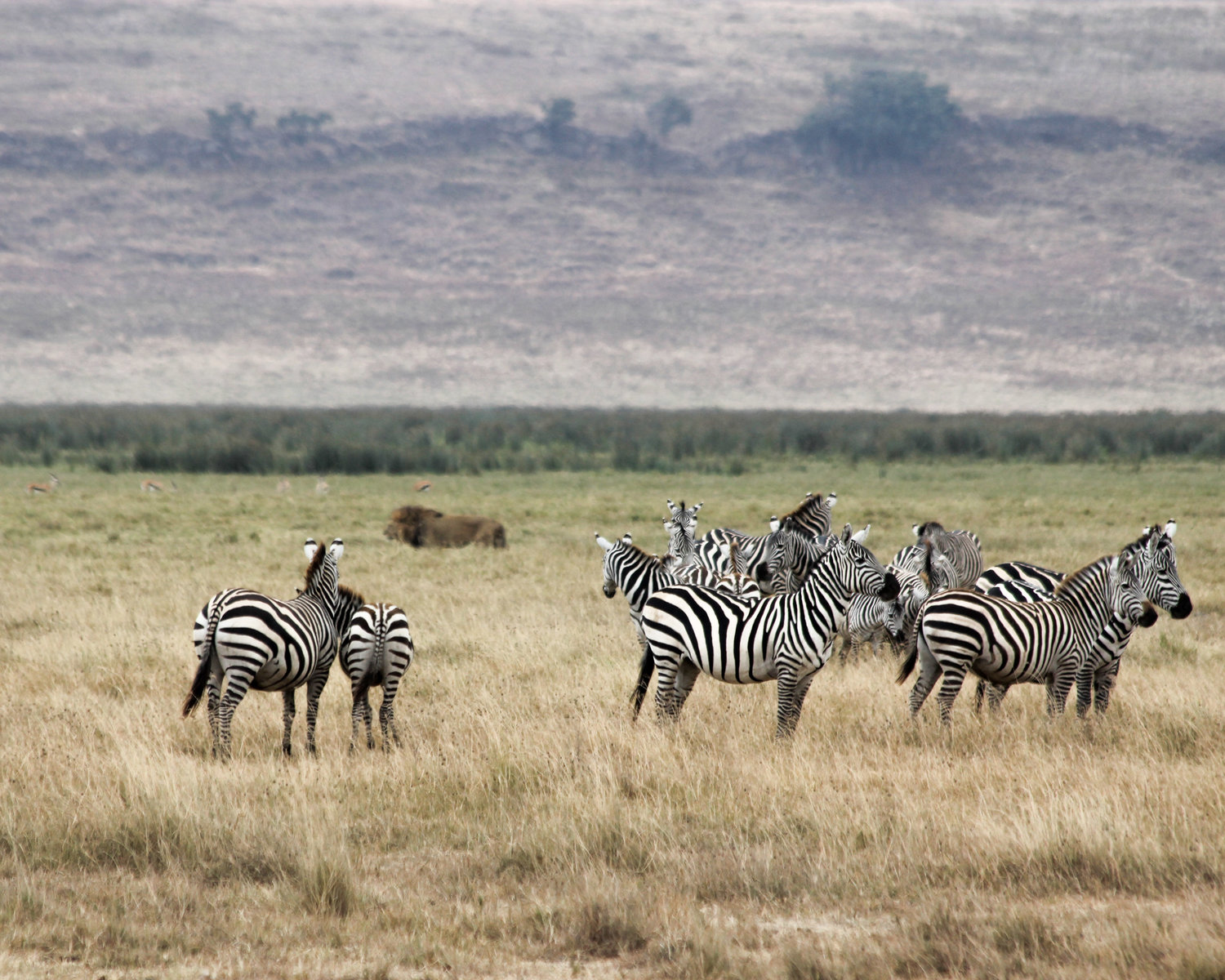 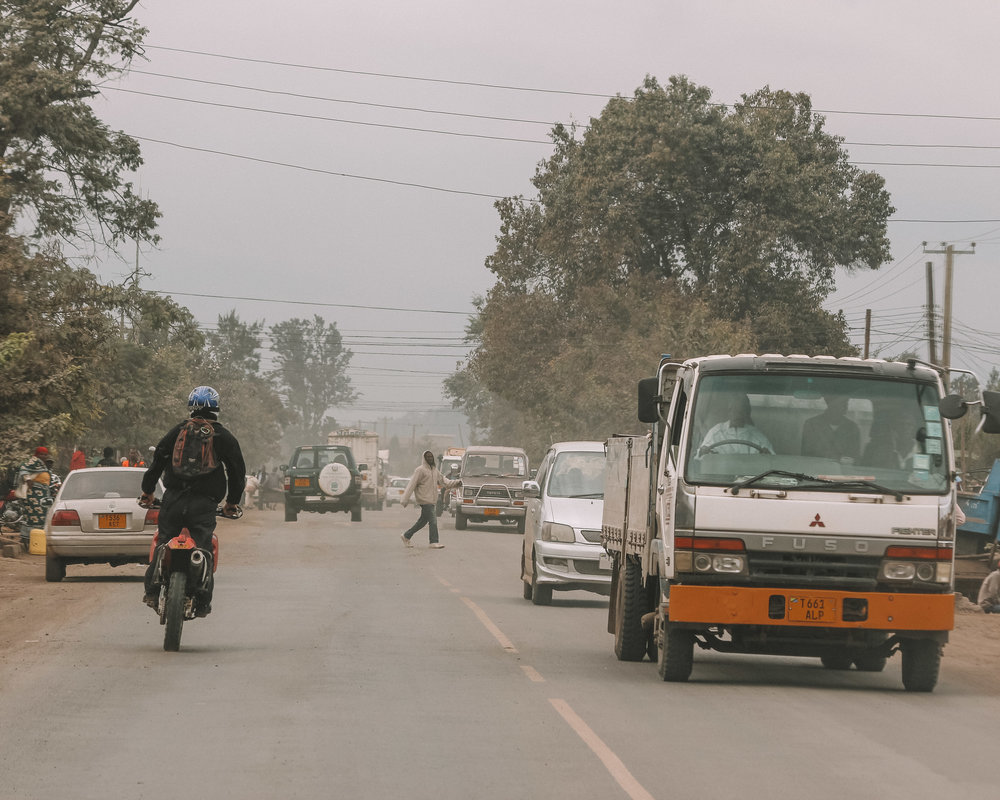 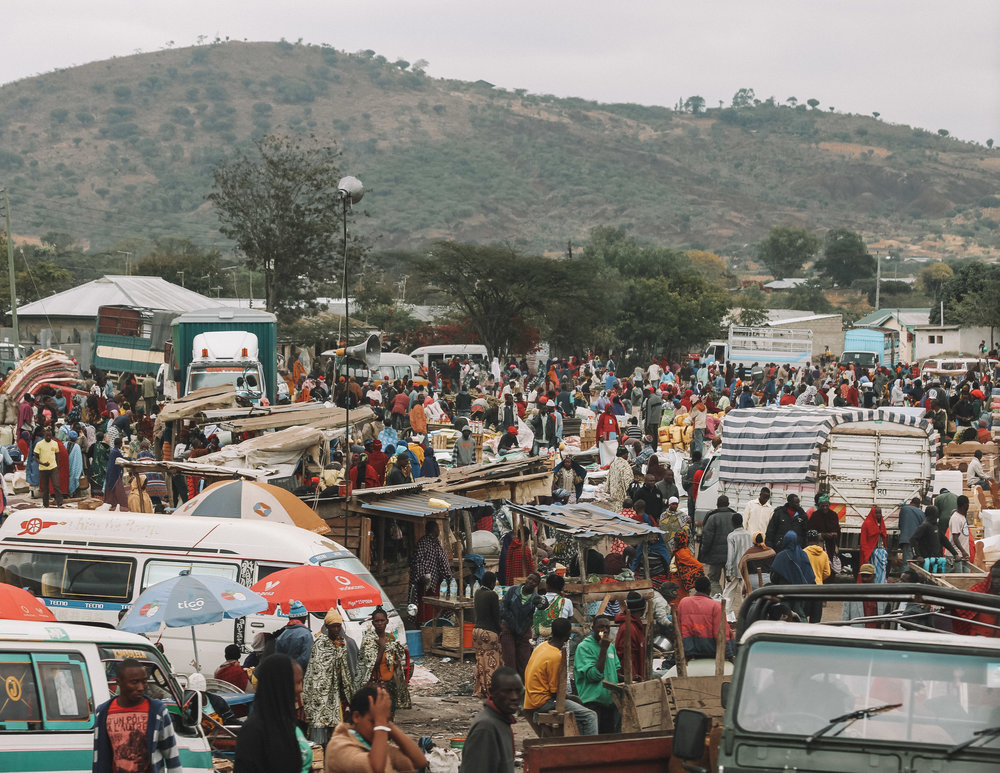 We first heard about Ngorongoro Crater while doing some work around the house with the Travel Channel on in the background. We both stopped to watch because we both knew we wanted to do an African Safari one day. At the time, we were newlyweds who had only been on our honeymoon and a few ski trips with our college friends together. We were planning to travel, but Africa seemed like it would be one of those trips that waited for after retirement.

However, we started to get serious about planning a trip there when we saw some safari trips come up on Groupon. A few were for South Africa and a few were for Kenya. We knew we wanted to go to Kenya if we were going to visit Africa to see some friends living in Nairobi. We started looking into the trip and ended up booking a three week trip to Africa within two years of first hearing about Ngorongoro Crater. The crater was a must for our trip.

What makes Ngorongoro Crater so special? It is the world's largest crater that is intact, inactive and unfilled. The walls of the crater make it more like a zoo as there is less migration here than in the Serengeti or the Maasai Mara. That means that there is no "bad" time to visit. The animals are there all year. There are some animals that do migrate in and out of the crater, but the majority live there for life.

The crater is also uninhabited by humans. The Maasai are allowed to bring their herds in to graze, but they must enter and exit daily. The same is true of tourists. You are allowed to enter in the morning for your safari and stay for the day, but all of the lodging is outside of the crater. There are no restaurants (you bring your own food) and limited bathroom facilities (which are sometimes overrun by animals!).

Before we could enter the Conservancy Area, we had to wait while our guide paid all of our entrance fees. There was plenty of entertainment in the parking lot with lots of baboons of varying sizes. We watched them chase down people who were standing outside their vehicles to snack, fight each other playfully, and try to scratch the letters off of vehicles. We even watched one fall out of a tree when the branch he was swinging on broke. He was okay other than what appeared to be bruised pride.

When we first arrived at the crater, our driver, David, stopped at a viewpoint along one of the crater walls. You could look out over the entire crater. We had seen this view from the Travel Channel show, but we did not expect to see it in real life. You could see some of the herds through my zoom lens even from the top of the crater.

From there, we headed to our lodging at Ngorongoro Serena Safari Lodge. The dining area and lounge area had floor to ceiling windows overlooking the crater. Our room had a balcony that also overlooked the crater. At night, there were talented performers to entertain guests. Entertainment included music, dancing, and impressive stunts!

A stay at Ngorongoro Crater will require two nights lodging if you want to spend a full day in the crater. You will need to spend more nights if you want to spend more time in the crater. It is a few hours drive to get from anywhere to the crater, and you will want to maximize your time in the crater. After a certain time, the entrance road becomes another exit to ensure everyone makes it out of the crater before nightfall, so arriving in the afternoon means you cannot enter that day. We did a morning game drive in Lake Manyara before heading to Ngorongoro Crater and did not arrive until late afternoon, so we had to wait until the next day for our game drive in the crater. 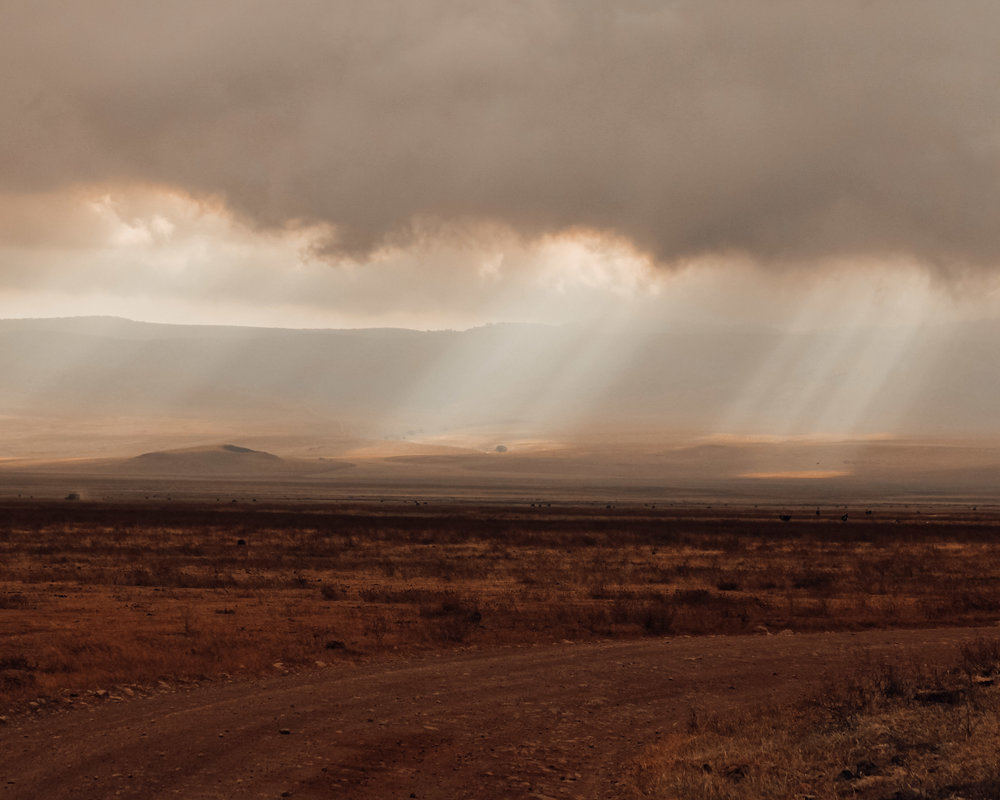 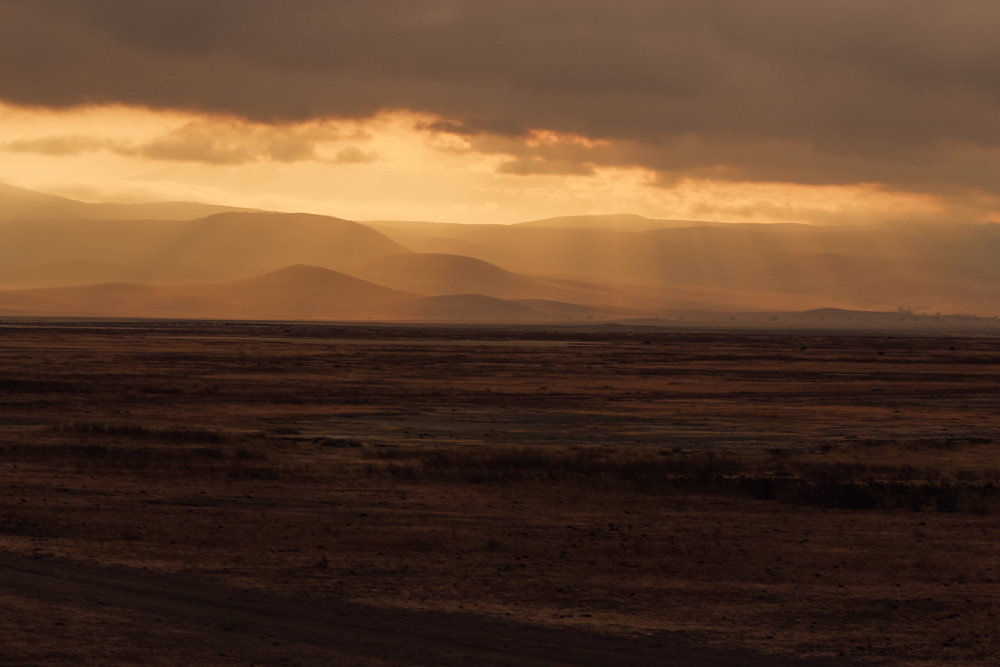 The next morning, David, our private guide and driver for our time in Tanzania, met us with boxed breakfasts and lunches before the sunrise. He gave us an option on if we wanted to start early with boxed breakfasts we could eat in the vehicle or if we wanted to wait for breakfast at the lodge. We wanted to get into the crater and start our game drive as early as possible. One thing we did not count on was for it to be cold in the crater. It gets chilly in the crater in the early morning!

Despite staying right at the top of the crater, our drive into the crater still took a little while. The road curves back and forth down the crater wall, and you are in a line of other early risers trying to get into the crater as early as possible. Once you are at the crater floor, all of the vehicles, some private like ours and others hotel owned, scatter, so you feel like you have the entire crater to yourself.

Ngorongoro Crater was our last stop on our safari, and we had yet to see any fully grown male lions with the full mane. As we entered the crater, we immediately spotted three adult males and an adult female. David informed us that the three males are brothers who rule one of the prides living in the crater.

Male lions who are brothers, usually born in the same litter or another mother's litter near the same time, will rule together for life. They will take over a pride together and will lead together. They will kill off any other males who try to overthrow them. Because there are three of them, they have ruled this pride for a long time due to strength in numbers and a low number of outside lions migrating into the crater. In fact, there are only 62 lions total in the crater thanks to several diseases decreasing their numbers in the last century. 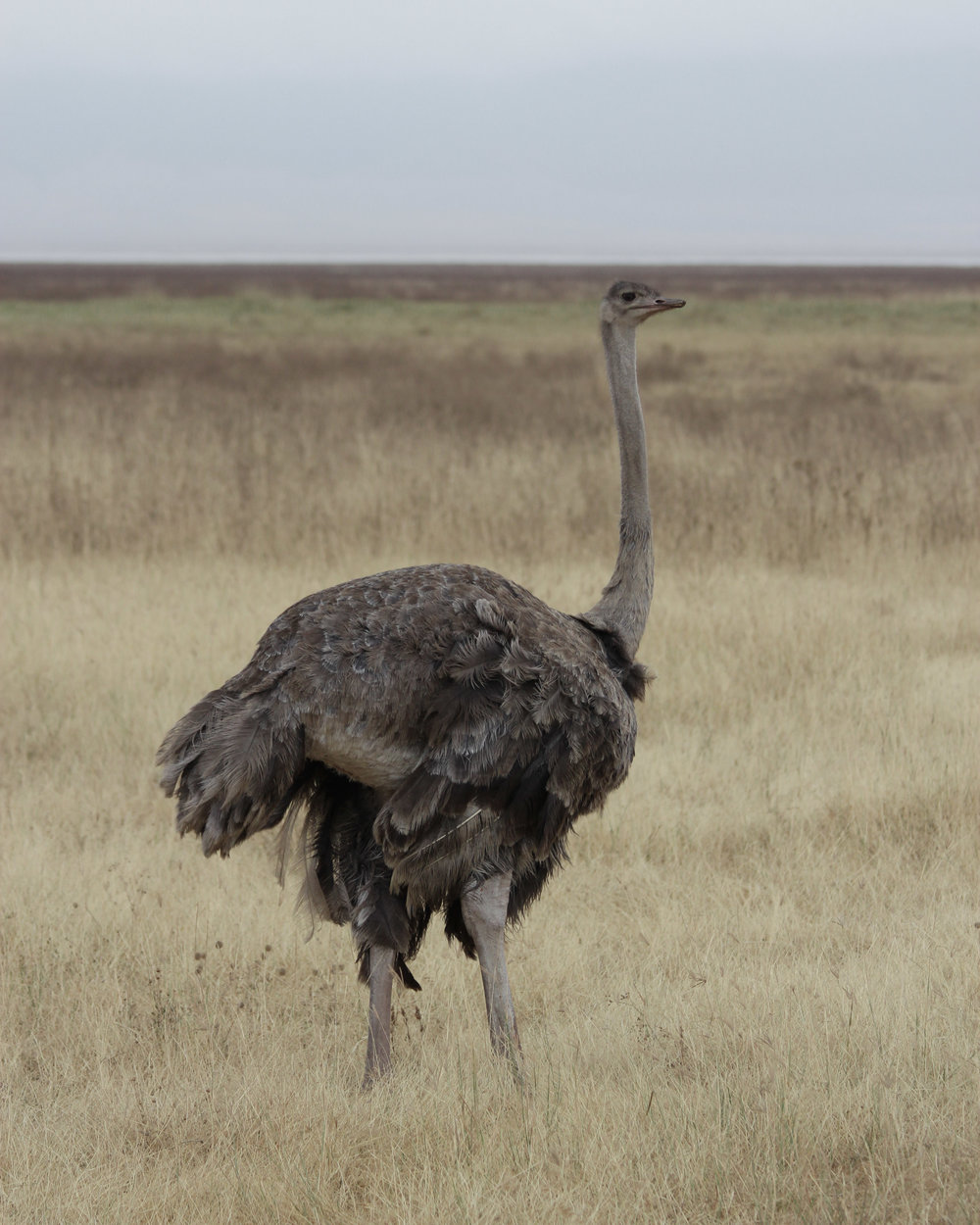 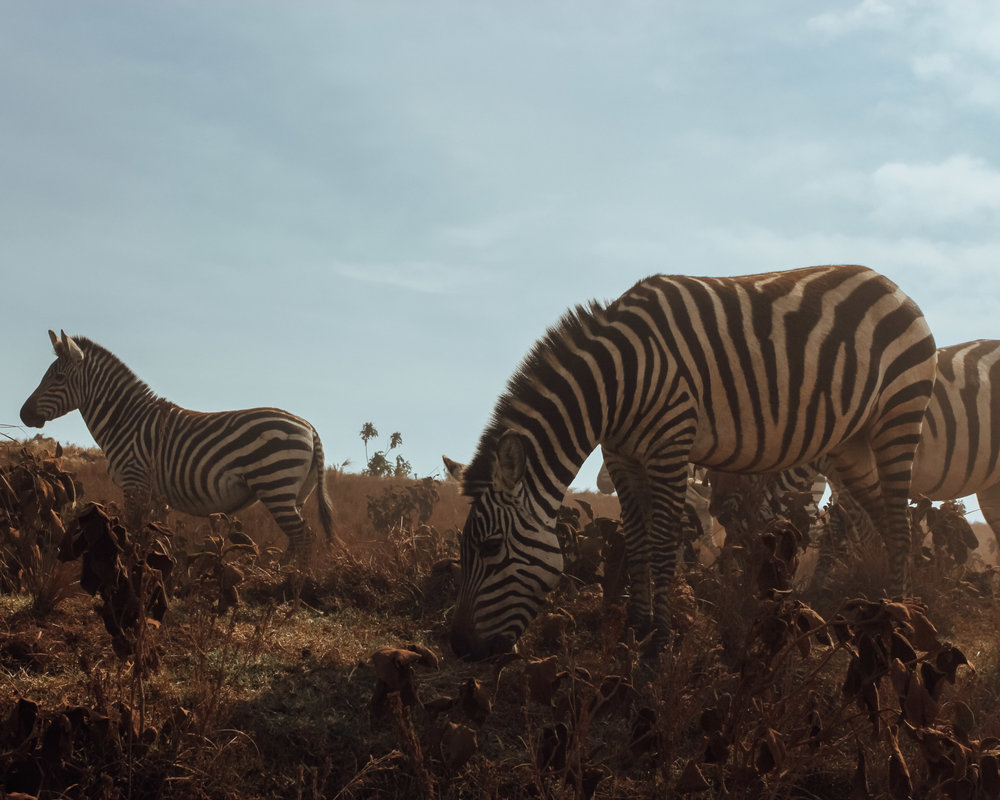 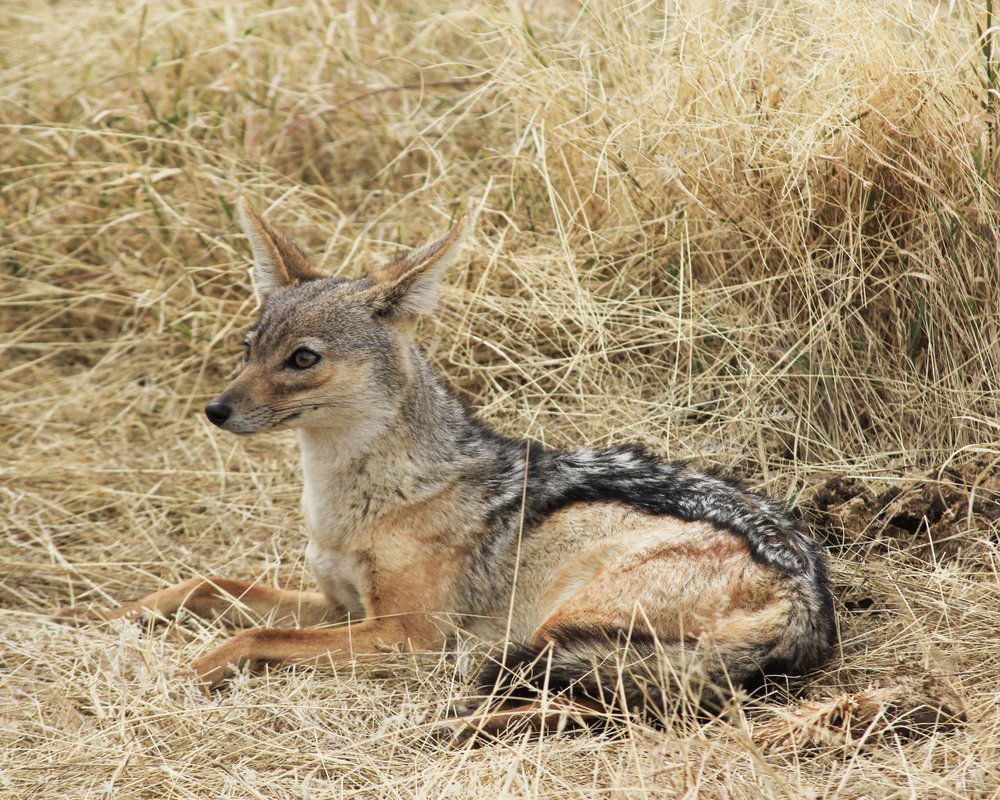 After watching the lions for a while, we continued our journey throughout the crater, rarely seeing other safari vehicles. Because we had the vehicle and guide to ourselves, we were able to focus on the animals that we wanted to see. If we were enjoying watching something, we could stay as long as we wanted. If we just wanted a picture and then to move on, we could do that as well (we quickly learned that we aren't bird people!).

Throughout the day, we saw a variety of animals. Zebras, wildebeests, and gazelles are common in Ngorongoro Crater. We found several jackals, and I wanted to bring them home. We saw a few ostriches, some elephants, hyenas, warthogs, cape buffaloes and several more lions. Hippos joined us at our picnic lunch near their watering hole. We even found one of only nine cheetahs living in the crater.

Our favorite memories include watching several lionesses hunt and watching a full stampede due to a male lion. As we were driving along, I spotted a lioness laying in the tall grass. We stopped to watch her and were the only vehicle around. She was watching a group of zebras coming into the area. She stayed crouched among the tall grasses to stay hidden. David explained to us that lions also have to watch the wind direction when hunting. If the wind blows their scent towards the prey, the prey will know they are there and leave the area. The lioness ended up not attacking the zebras since they stayed in an area without enough tall grass around them. They eventually caught her scent, alerted each other with a panicked sound, and left the area.

After they left, we continued watching the lioness and a jackal who was in the area. The jackal knew she was there, but he did not know exactly where she was hiding. He was panicked. When she finally sat up, he saw her and ran past, keeping his eye on her the whole time. After he left, a second lioness popped her head up above the grass on the other side of the path. Until that time, we had no idea she was even there!

The stampede was another impressive sight. We suddenly saw a large group of zebras, wildebeests, and gazelles running in the same direction. We came to a stop to watch. I spotted a few hyenas among them and immediately assumed the hyenas caused it like in The Lion King. Our guide told us they didn't because the hyenas were also running away.

As we kept sitting there and watching, we finally spotted the cause of the stampede. A male lion was walking up in the distance. We could barely see him at first, but he walked straight towards us. An adult male lion typically will not hunt. They are too big and weigh too much to be able to run down most of the animals. They are also too lazy, spending up to 20 hours a day sleeping. The females are typically the hunters. However, just him walking into the area was enough to scatter hundreds of animals. The only ones who stayed even remotely nearby were some Thompson's gazelles because they knew they could outrun him. All he did was walk over near us, lay down, and roll around in the grass before falling back asleep. Seeing the respect the other animals had for him was amazing.

As nightfall came, we headed back to our lodging before returning to Nairobi the next morning.

Ngorongoro Crater was a highlight of our safari, and we highly recommend it to anyone planning an African safari. Even if you are not planning a trip now, it's a great location to add to your bucketlist! 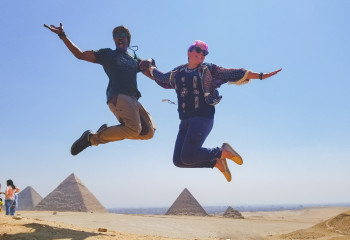 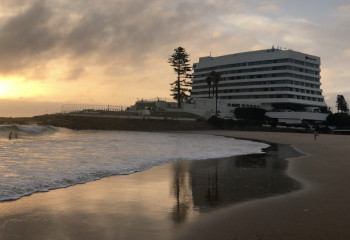 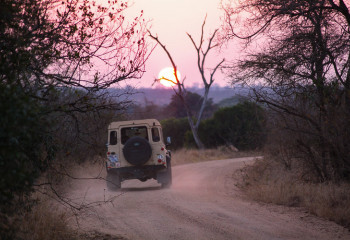